Everyone wants to be happier. But no one thinks to ask how to be happier. We assume we know what we need to be doing. After all we’ve seen the movies. We watch the Academy Awards. We’ve see the smiling faces of our almost certainly more fulfilled friends on Facebook. But it’s all a trick. All the things we’ve been conditioned to think will finally teach us how to be happier are total bullshit. Take, for example . . .

Prestige (aka the esteem of others)

Ah, prestige. The desire to feel important. It is a fundamental driver of nearly all human action. But it does not satisfy. Not in itself at least. That longing to be important is totally dependent on the opinion of others. And as long as your well-being hangs on the whim of someone’s opinion, you’ll never be secure. You’ll need constant reassurance of your status. Because your self-worth doesn’t come from things you control—your actions—but from the uncontrollable perceptions others have of them. Prestige, fame, status, whatever you call it – it’s fools gold. It’s the reason celebrities blow their heads off. Placing something as precious as your self concept in the hands of others is suicide. It doesn’t matter if some employer isn’t impressed by the college you attended, or some dinner party guest has never heard of your company. It doesn’t matter if someone omits the “Doctor” in your name. Prestige doesn’t fucking matter. Let others ignore your importance because . . .

Feeling superior to anyone is a destructive pleasure

Say you walk into a room. You size every person up and know you are more capable and more successful. You make more money. You’re more eloquent. People prefer your company to theirs. Simply being in their presence makes you feel smart, sophisticated, and rich. You walk out feeling like a million bucks. Awesome. Have you reached your goals? Are you living the life you want? Or are you the same exact half-baked person you were when you entered the room, getting high because you look over your shoulder and think you see slower runners in the big race of life? Well, life isn’t a competition. Every man runs his own race. Alone. You can’t beat anyone else cause you’re not running on the same track and you don’t have the same finish line. Let other people live their lives. Be happy for their successes in the way you would if you had everything you needed in the world. Their success takes nothing from yours. The guy who needs to knock others is the guy who isn’t impressed with himself. The only person you need to be better than is you, yesterday.

Money beyond the cost of food, rent, and basic upkeep is a trap

There is a pervasive, ludicrous belief that once you’ve accumulated enough money, you’ll be free to do the things you really want. That amount of money is usually just a few multiples away (when I have a million in the bank). And it stays a few multiples away forever (when I have 5 million, 10 million . . .). Here’s the deal: if you don’t set an absolute exit date within the next 2 years, the probability you ever leave the rat race drops to just a shade over zero. It doesn’t matter how much you make. More money in not the answer. More money is the problem. Because money can’t buy freedom. It can only distract you from the truth: you have the freedom you allow yourself to have. Like Achilles says: And one more thing – the money you’ll exchange for your life won’t satisfy.  Yes, a baseline level is necessary for survival nd certainty.  But the upper limit of money contributing to day-to-day happiness is about $75,000.  This is well-documented. So say you quit your job. You chase your dream. You do what makes you happy. Congrats! But, I’m sorry to say it won’t all be roses. Because the hate-brigade is coming . . . 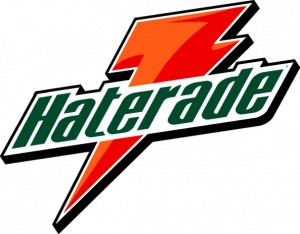 If you try to be liked by everyone, you’ll never do what you love

Here’s the deal: people all across the world hate you. Right now. They hate you for your nationality, for your race, for your profession, for your religious beliefs or lack thereof, for your politics, for EVERYTHING. You just don’t know it because you are insulated by your obscurity. But as soon as you do anything worth noticing, they will rear their heads. And guess what? Doing what you love–and doing it well–is worth noticing. Not only will the haters refuse to recognize your greatness, some will actively try to drag you down. They’ll shit on what you do and what you create. They’ll call you stupid, immoral or just plain ridiculous. Out of insecurity, out of principle, or if they are close to you, out of a desire for you to stay the same. You don’t need their blessing to live your life. March on. That’s all for now folks, Charlie P.S. Think I left something out? Leave it in the comments. Maybe we’ll get a round 2 of destructive pursuits going.

Do you know the 4 emotions you need to make a great first impression every time?

If you create these 4 emotions in a SPECIFIC order, you are guaranteed to make an amazing first impression. Get the order wrong…and it won’t turn out so well. This explanatory video takes less than seven minutes to watch and is 100% free.

Click Here To Get The Video And Discover The 4 Emotions!

7 Responses to “How To Be Happier: End These 4 Life-Sucking, Unconscious Pursuits”

Confirm Your Email To Enroll In
Charisma University Today

“In 6 weeks, I've gone from being a lonely introvert hoping to better connect with people, to an energy filled extrovert who makes new friends everywhere I go.”

We use cookies to ensure that we give you the best experience on our website. If you continue to use this site we will assume that you are happy with it.Got itRead more